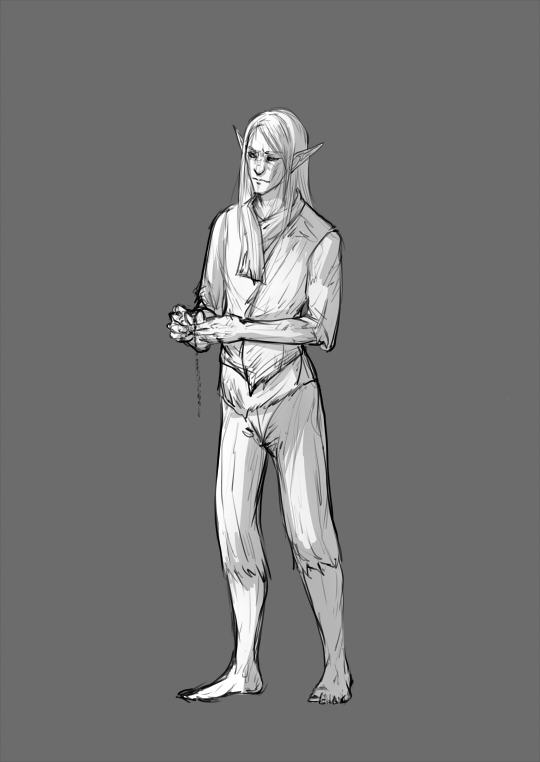 Ervian is an elven soldier held in Empire´s prison. Being kept there for decades, he later fell in love with the captain of his troop. Mostly because of shared misery and the will to survive they became lovers. The captain was executed later.

Ervian keeps himself alive with the aim to get out one day and to look after captain´s wife and son. He is looking at a medailon with their portraits.

Well, Kathea asked “How did he end up in prison?”, so here is the rest of his story for all of you too:

Well… That’s another tragic story. (I am full of tragic stories these days.)
He was sent with his troop to fight Empire´s soldiers, it seemed strange – the empire´s army wasn´t that huge and it wasn´t a good time for war. (The elves had to defend their borders anyways.) When the battle started, they realised that “the army” were mostly underfed young men and boys. The Empire was struggeling with a famine and this was kind of a way to get rid of the starving poor.
The elves refused to fight ill kids and they gave up. Their captain supposed that they would be returned to their homeland for a huge amount of ransom money (or at least for food supplies). That was the deal with the empire´s officers.
Unfortunately the elves were taken to captivity and no message ever came back to their queen. They ended up in a prison, tortured, interrogated and slowly killed one by one by experiments of the inquisition. Their families have no idea that some of them are still alive.